A year makes. This time last year I was complaining about the endless downpours of rain that were destroying our crops and flooding roads. Now I am lucky to have saved some of that subsoil moisture to keep the crop going since we have had no significant rain since the snow left except for one half inch shower. Big clouds build up and blow by with maybe a light shower (or nothing at all). A few miles one way or the other can make quite a difference though.
Even a month ago I was complaining about the muddy fields, still wet from last year's excess rainfall.

Hay crops will be short to cut and I need to get busy on that now. We are still lucky here compared to some further West who are already past the point of recovery on their crops even if it did rain much now.
It is pretty ironic that though we need rain for the crops now there are still roads and farm yards under water from the effects of last year's cloudbursts . Like this one I shot earlier this week. 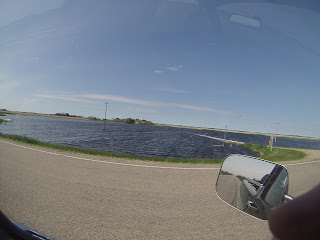 Water is kind of like money. There is enough out there for everybody but it is just not evenly distributed.
Posted by Ralph Goff at 8:02 AM