Not me but the sky. Filled with blue smoke from Northern forest fires that has found it's way down to East central Sask. 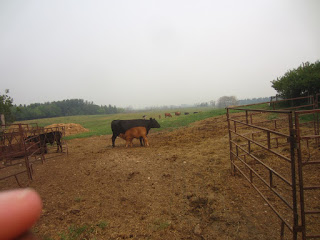 Thick enough that it actually burns the throat after being out most of the morning. I baled up the last three hay bales that were near home.
The hot and dry conditions yesterday caused the baler to regurgitate the hay as fast as the pickup tried to push it in. Resulted in plugging up with fine chopped and dusty hay that was no fun to clean out *(By hand, twice!). I tried again after dark and there was enough moisture to promote good feeding and the hay rolled up into bales just the way it was intended to.
I was planning to head for the hundred acre woods and cut more hay today but  rain showers are in the forecast for tonight and tomorrow. We do need the rain. This cloudy and smokey morning is giving the crops a break from the relentless blazing heat of the sun we had yesterday. Long term forecast is not looking good at all. Hot and dry. Some of the folks on Agriville have pretty much given up on their crops. We are not that bad here yet.