I finally got finished (for now) spraying crops and unhitched Monday morning. Removed the duals from the 2090 and should have probably hitched up to the haybine and cut hay. But I don't usually start til into July. It is a little shorter crop this year since  we have had so little rain. A big change from the past decade when I was always complaining about too much rain.
Luckily the crops are hanging on using subsoil moisture. And it has been mostly below normal temperatures which does not  stress the crops so badly. Those forecasts of a hot and  dry summer were a bit out but its not too  late to come  true. Heat predicted for next week.
According to photo records we are little behind last year as the canola was blooming yellow by this date. I'm not seeing much for flowers yet but any day now.
Wheat prices have taken a real nice jump. They will likely increase quite a bit more now since I just sold the last of mine a couple of days ago. Too bad canola is not doing the same but maybe its just a matter of time if we don't get rain. 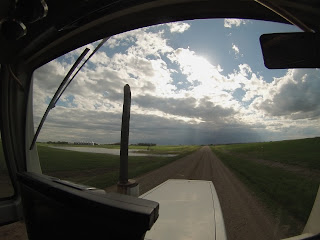 Heading home on the grid road in the land of living skies.

Email ThisBlogThis!Share to TwitterShare to FacebookShare to Pinterest
Labels: haying in Saskatchewan, land of living skies