18 hour day, though I had a few  breaks. On the road with the Loadstar to Eskdale with flax arriving 8:00 am. Nice quiet and mostly sunny morning. 229 on this load and Cal said come back with the rest about 12:30 so he would have a load of cleaned ready for me to take home. Back to yard and load up about 150 bushels more flax. Still two hours to spare so thought about taking the chain saw out in the field to cut up the trees the beavers dropped at the edge of the field. But considering rain is in the forecast I decided I better work the rest of the garden first and plant a little as it would be good to have seeds in the ground when rain comes . Consequently the beaver logs are still in the field. Another day ..
Just got going with the roto tiller when cell phone rings. Neighbor M still wants seed flax from me but now has no bin to store it and both his trucks full of seed or fertilizer. Which also means he can't help with the trucking. So I can store it here for him for now.
Finished the tilling. Planted a row of new Caribe potato seed and a row of beans (green I think). Off to the seed plant eating my lunch on the road. Got a good load of 229 bushels clean flax and hauled it home to dump in the Westeel aeration bin. Took the opportunity to empty the leftover flax seed stored  in the air seeder tank into the truck and then mix it into the bin of new cleaned flax.
Next clean load would  not likely ready before 4:30 so I kept busy at various other jobs til then . Cloudy and threatening showers all afternoon but nothing happened. Took another half hour or so to finish the cleaning. Lots of unthreshed flax pods and chaff. i need to do a better job of combining flax next year.  Got that load hauled home, unloaded and back to pick up the screenings. C busy working at the oat cleaner so I loaded the screenings by myself. Nearly loaded coriander screenings by mistake but noticed it in time. Then nearly plugged the system as I forgot to start auger number 2 as well as number 1.  Seeders going all along the way. Met B on the road and had a brief chat . He had just been to his second grass/stubble fire in two days.
Got the screenings unloaded in Twister bin after moving the auger. Then move the auger back to set up at the fertilizer bin. Then install the fertilizer tank in the truck box. A big job that took the rest of the evening. Loaded some fertilizer into it. Partially solidified at the bin bottom and terrible dusty, this being a rare and quiet day in Sask. Then emptied the leftover wheat stored since last year in the air seeder tank into the truck boc. Air seeder and truck now ready to go but by then it was dark enough that I decided to quit. I had hoped I might get the air seeder into the field and seed a few acres of wheat today but the flax cleaning took longer than expected. Rain in the forecast for Sunday night. Even a chance of showers tomorrow so maybe I won't get in the field at all. There was a time when we did not work Sundays but we seemed to have more time in those days. Now seven days a week are not enough to keep up it seems.
Got in for supper at 9:30 and washed several days worth of dishes. Thus ended a typical 18 hour day at seeding time. 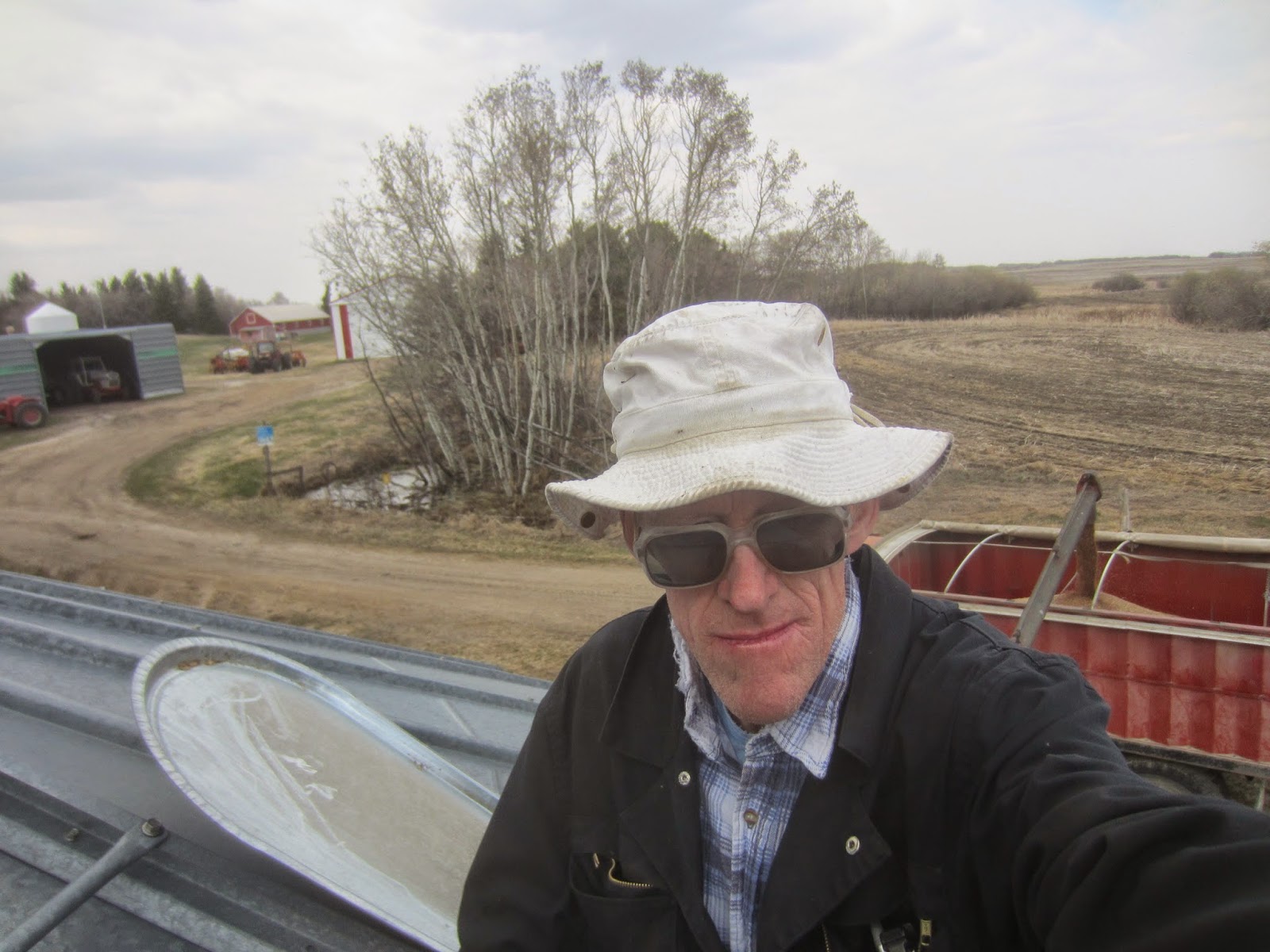